September 2020 recap of real estate activity in Springfield Township. Curious about what it all means? Message me to discuss or call direct at 215-520-7166. Email: neil@realtorneil.com 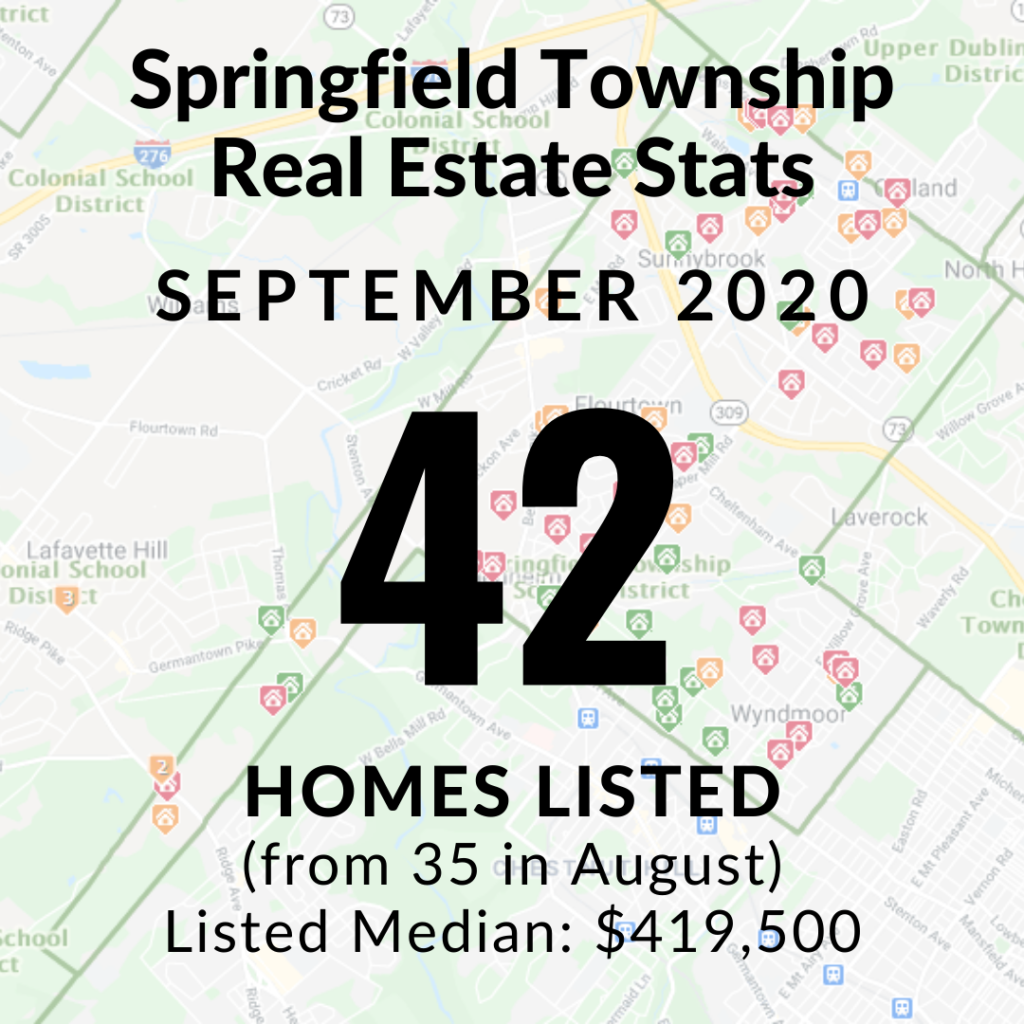 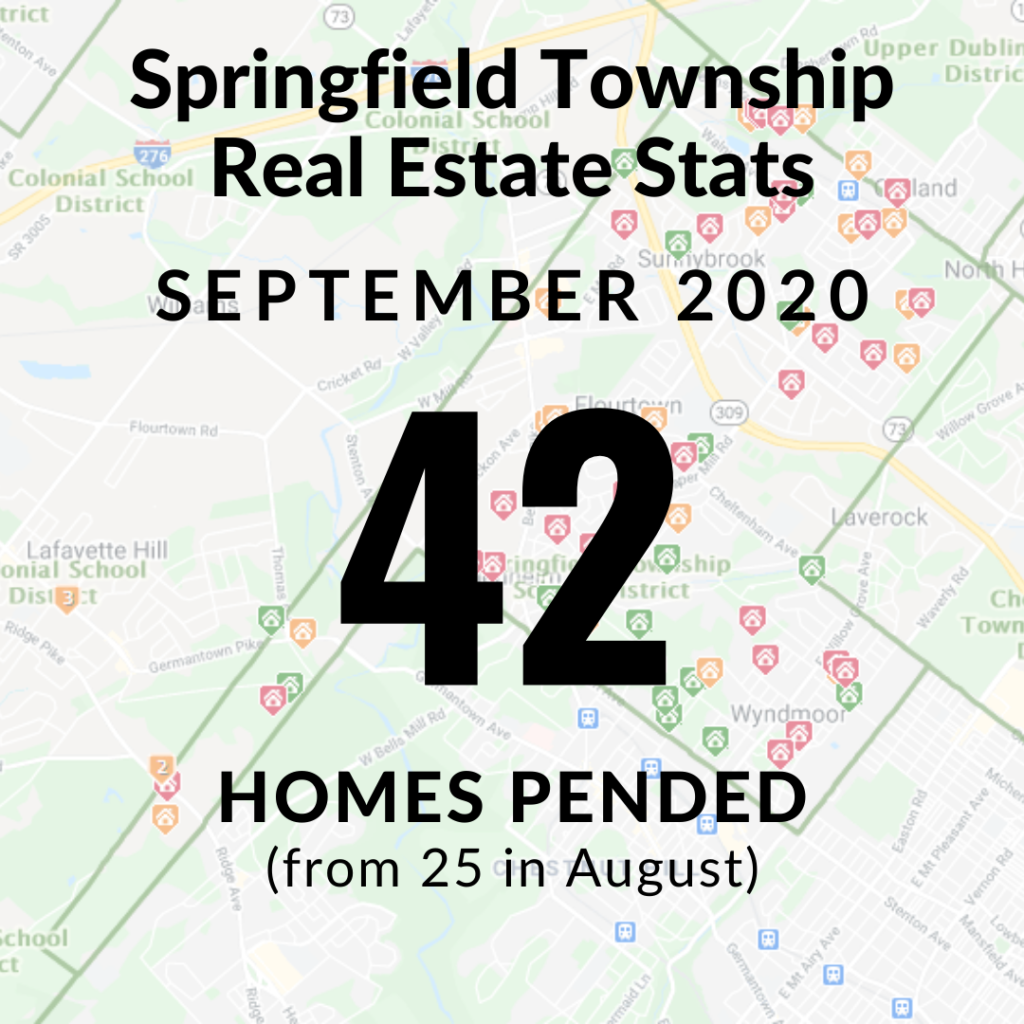 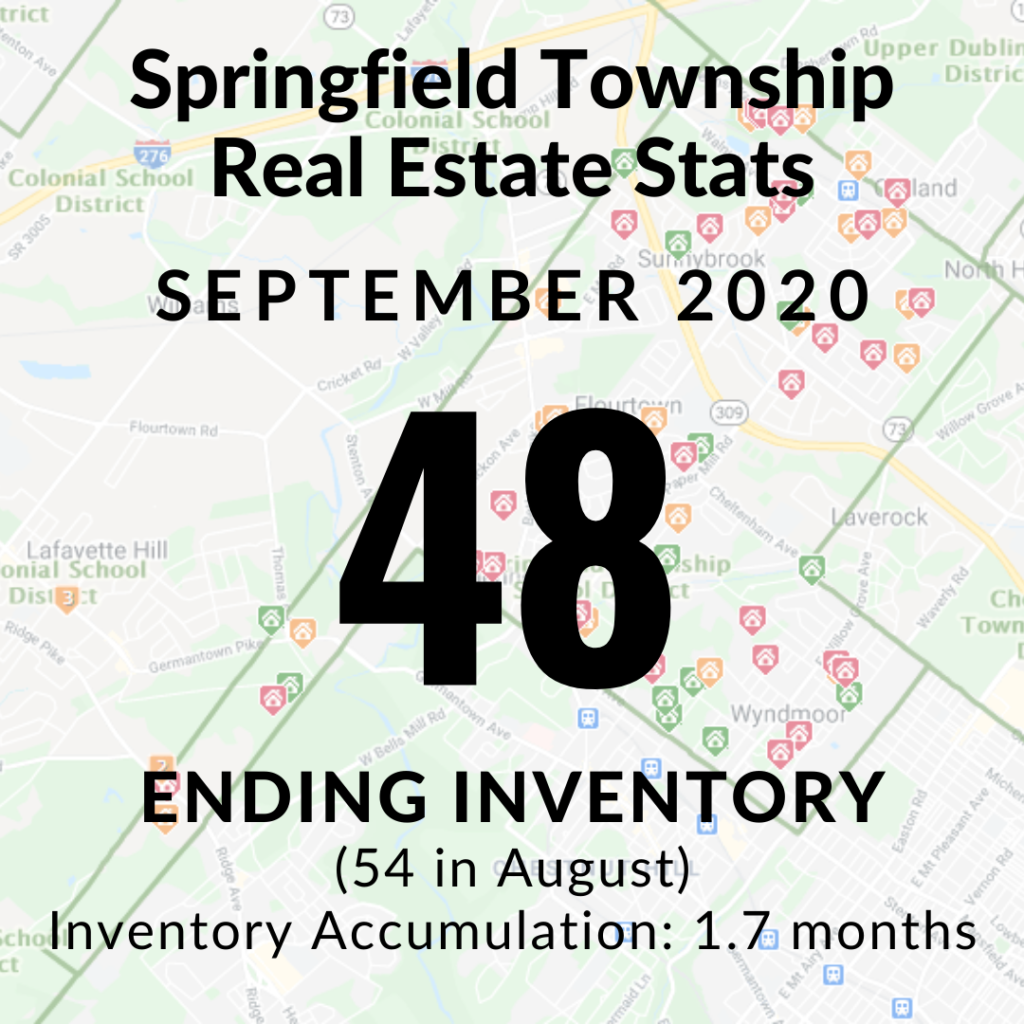 Inventory at the end of September was 48 with a monthly accumulation of 1.7 months based on current sales rates. The absorption rate dropped from 3 to 2.6 months indicating an even stronger seller's market in September. 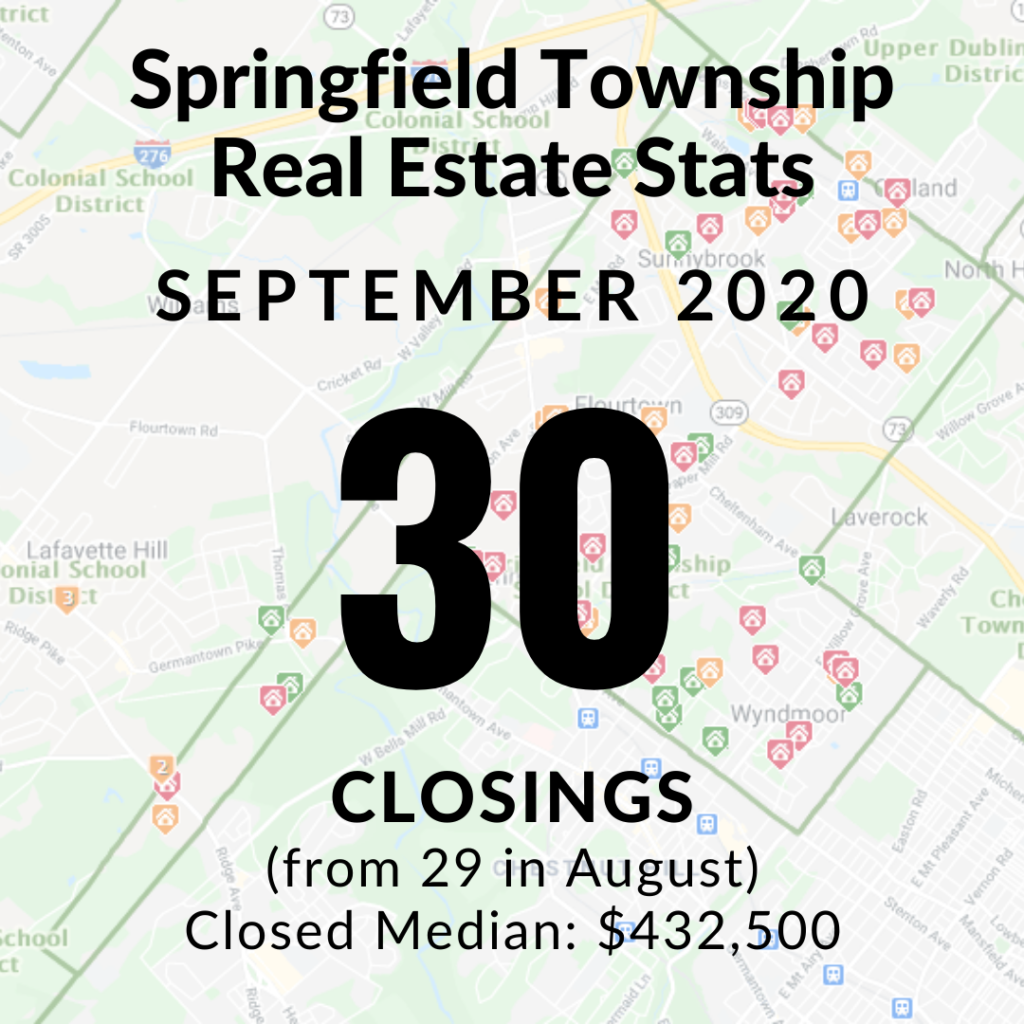 30 homes reached the settlement table in September up slightly from 29 in August. Closings are more of a reflection of inventory and contracts written in previous months than they are a reflection of activity during the month in question. It typically takes between 30 and 60 days from an executed contract to a closing. The median selling price for closings in September was $432,500 up from a median of $415,000 in August. 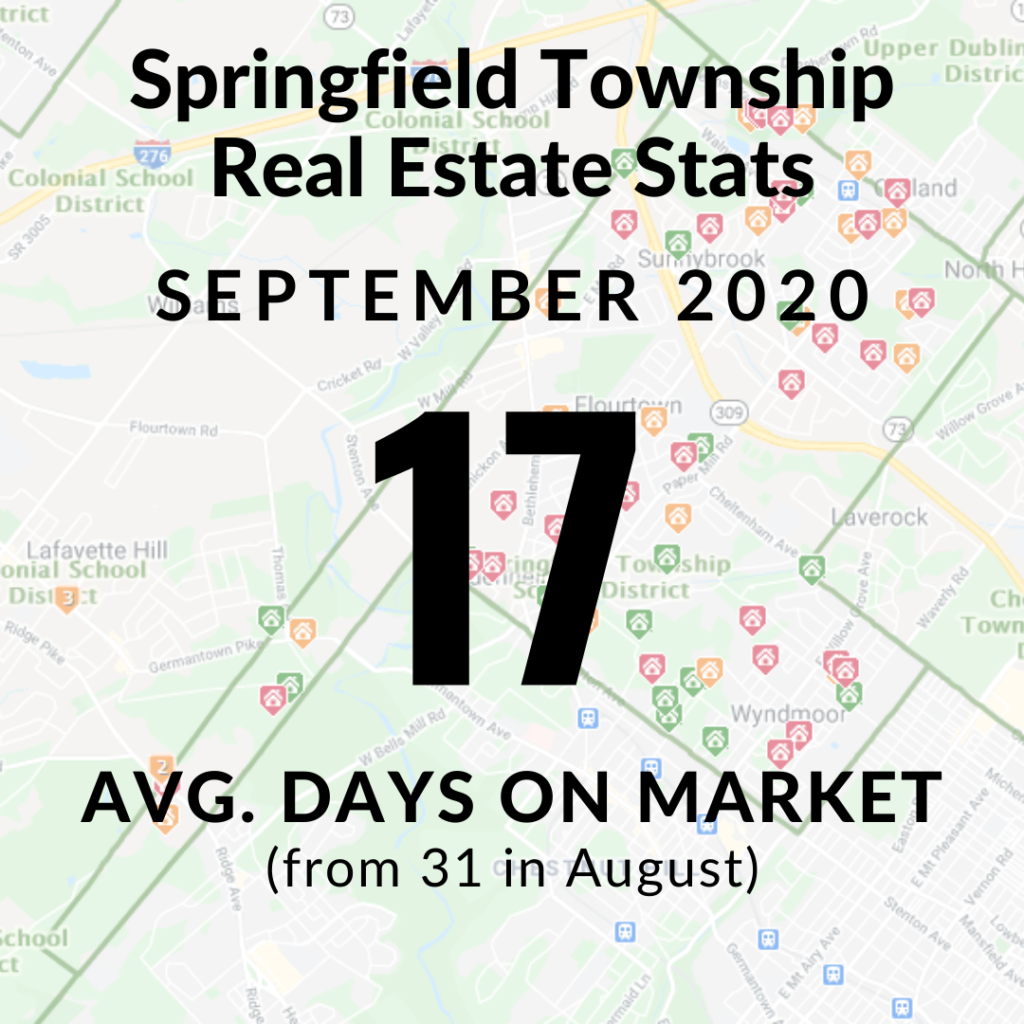 The average days on market for homes closed in September was 17. This is down from an average of 31 days in August. It is important to note that this is for the entire Springfield market with homes ranging in value from $250,000 to 1.6 million dollars. While not always the case, homes in the higher price ranges typically take longer to sell than homes closer to the median. This was not the case in September where all but two of the sold homes were on the market for less than 30 days and 3 of the 4 million dollar homes sold in less than two weeks. 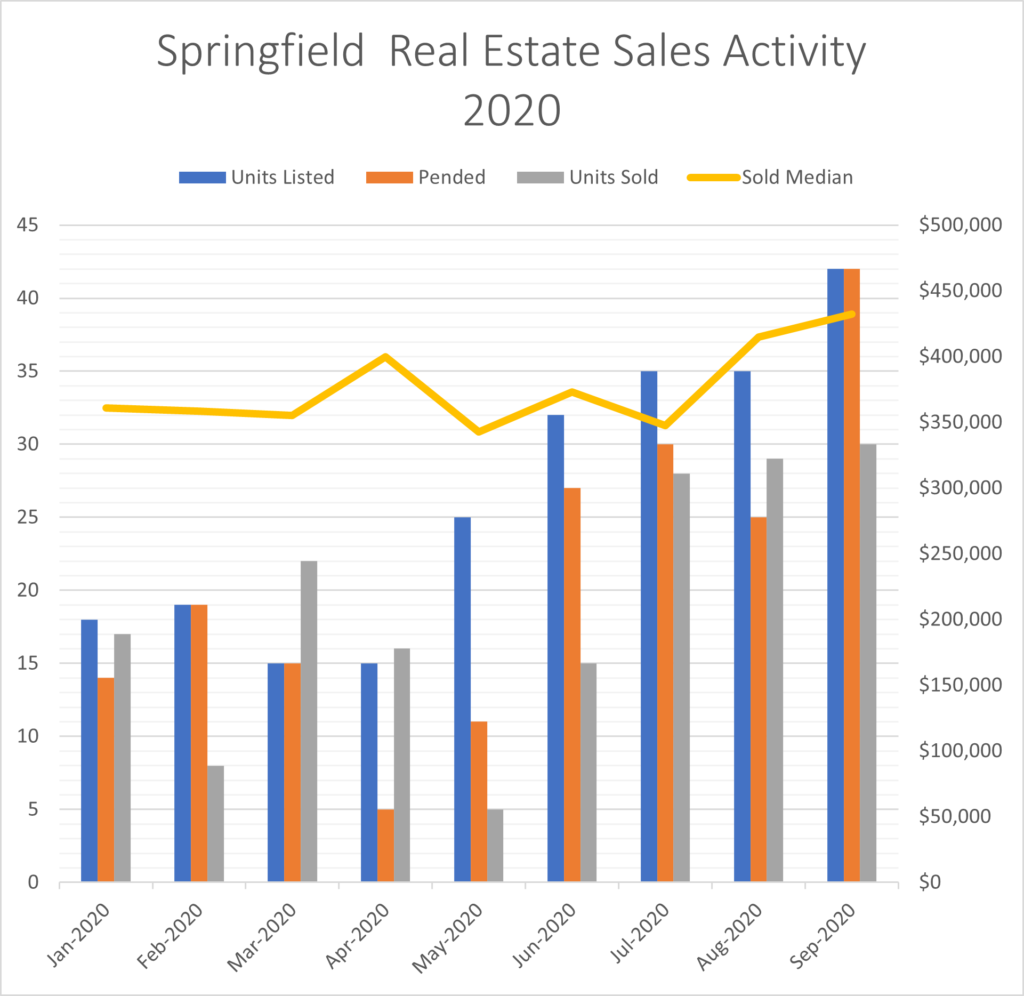 Patrick Kane
02:02 26 Apr 20
Neil made the whole process of buying and selling our homes a breeze. He was thorough, patient, diligent, and extremely positive throughout each step of the process. Buying and selling a home is always a stressful task but doing so during a pandemic is uncharted territory. Neil helped us navigate our way through and we were able to do so without a hitch. We are so thankful for everything Neil did for us during the last few months and would recommend him to anyone looking to buy or sell a home!

David Laigaie
18:57 09 Jul 19
Neil is patient, knowledgeable, creative and persistent. He sold my house in a difficult market by doggedly following up with potentially interested buyers and their agents. I especially appreciated Neil’s mastery of social media. His listing was terrific, including a spread of professional photos, a Hollywood quality video tour and an impressive video brochure. Neil was patient with my many questions and respectful of my ideas, both good and bad. He never got rattled, never lost faith and delivered a buyer. I would highly recommend him.

Jake Nussbaum
15:40 09 Jul 19
Neil is an excellent realtor. He showed patience, generosity, and expertise as we looked for a home together in Philadelphia. In fact, we looked together for over one year! Neil was patient throughout it all, and never made me feel pressured or uncomfortable. He knew the market, and consistently gave me good advice, including when to make an offer, and even when to walk away from a deal on the table. In the end, I ended up with a great place for a good price, and it was all thanks to Neil. I can't say enough good things about him and the process!

Andrew Jones
18:59 08 Jul 19
Neil was patient with us while we searched for a home in Mt. Airy. He worked with us for over two years before we finally found a home that we wanted to purchase. Neil never pressured us into buying a home during that time and kept our interests as his top priority. The seller for the house we wanted to buy was fairly difficult to work with but Neil helped us successfully navigate those issues to ultimately get the house we wanted. When we went to list our house for sale, Neil did an outstanding job of marketing the property and once again gave us advice on how to manage receiving and selecting from different offers. We were able to go under contract in less than a week and successfully get through the inspection period without any issues. Neil is a truly excellent realtor and I would highly recommend him to anyone looking to buy or sell a home.

George Anderson
11:59 07 Jul 19
Neil helped us find a rental as we relocated from Baltimore to Philly. He was very helpful as we tried to determine what neighborhood we should move into and found us a great place. Neil also did quite a bit of extra work to help us get the leasing agreement in in place as the landlord's agent seemed to be confused by modern technology. We will definitely use Neil as our agent in our next Philadelphia real estate adventure!

Bill
05:03 07 Jul 19
Neil is an excellent realtor. I was very fortunate to have his help and guidance during my recent search for a new home. He made a task that can sometimes be tedious and frustrating interesting. He is very knowledgeable in all aspects of real estate and above all was always patient and available when I needed him I recomend Neil without any reservation Bill Willis

Kiran Sebastian
13:51 03 Jul 19
We have experienced Neil DiFranco as a very gracious and superbly skilled Realtor who patiently walked us through the many complicated processes involved in buying a house. He was very knowledgeable, always available and responsive, especially in terms of getting back to us whenever we had a question about something. We truly appreciate the fact that he accompanied us with understanding, knowledge, and sensitivity throughout this journey and made sure that we got what we wanted. If we ever need to go back to a Realtor, we will definitely go back to him.

David Ostrowski
09:38 03 Jul 19
Neil helped us but our first rental property. He was patient, kind, and extremely helpful. I had Neil crawling around some pretty dark and dusty places and he always came up smiling! Neil is someone who can be trusted and if he doesn't know the answer, he'll find it for you. It's clear Neil is not in this for himself, he has a genuine caring concern for his clients. Neil did so much more than I ever expected him to do. He's has a great attitude, easy to speak with and we really enjoyed working with him.
See All Reviews
Reviews on Zillow

“Neil is patient and knowledgeable. My wife and I were very selective in purchasing our first home; Neil understood what we wanted and also educated … more “

“Neil was very responsive, gave good advice and was great to work with. Our home sold quickly and Neil made the process much easier. I would … more “

“Straight A’s for Neil DiFranco and his team at Elfant Wissahickon. He is a competent and knowledgeable professional who made selling our home of 35 … more “